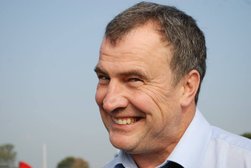 I am looking forward to the challenge
Steve Hough - Club Chair

The clubhouse was busy with members last Thursday for the club's Annual General Meeting. Members heard addresses from the Chairman, Chair of Rugby, the Treasurer and Chair of Senior Rugby. The club remains in good health financially, and we look forward to the challenges of playing in Regional North East 2 division.

The Chairman (Phil Atkinson) announced that he would be reluctantly standing down from the role because of work commitments. The club however is delighted to announce that Steve Hough was voted in as the new Chair of the club. Steve is a former PRUFC player and went on to play national league rugby for Rotherham. In his acceptance speech Steve said he was looking forward to the challenge, thanked Phil for his work as Chairman and outlined his priorities for the future.

The club thanks all those who have served on the Committees over the last 12 months.